Words On A Page

Ah, but what words! The history of all human art sees our species attempting to represent and explain the world we move in and ourselves within that world. Curious then that we invented a written language in which 26 letters have to stand in place to cover about 40 vocal sounds (in English at least); and that our sentences in the main proceed in a linear fashion, subject noun, verb, predicated object noun, when our brain comes up with a flurry of thoughts arranged in anything but linear fashion and our speech rhythms are peppered with disjunctions and repetitions. 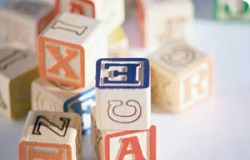 So why not go back and examine our basic building blocks as writers? Language, alphabets, grammatical organisation and see if we can have some fun rearranging them. Maybe we'll even get a bit closer to the truth of things, whatever that may be. Take a look in a thesaurus, look up a word like 'inebriate' or 'rebuke' and see how many synonyms they have. Now compare that with more fundamental words such as 'happy' or 'sad'. A strange hierarchy of word use. Since there is such a relative paucity of words for expressing human emotions, we are forced to resort to couching them in terms of other things. The sainted metaphor take a bow (and claim its royalties). Is it just me, but haven't most possible metaphors, of combining words to represent both themselves and suggest something else similar but different by comparison, well, haven't they mostly all been constructed by now and put out into the public domain? Aren't we suffering from a bit of 'metaphor fatigue' at this point in time? And yet the planet is changing so rapidly through technology, there ought to be a whole host of fresh ways of seeing the world. Take a gander at the scientific realm where they also seek to explain the world - both cosmological and sub-atomic - in which we dwell, well they are imagining the most inventive models and yes metaphors, to explain their theo-heretical notions. Seeing as they can't actually prove the existence of particles, that probability suggests ought to exist or behave a certain way. Stephen Hawking's books are literary masterpieces, look at his metaphors to explain abstruse things. String theory? C'mon, how rich is it to explain the dimensions of existence like a child playing cats' cradle with her mother's balls of darning wool? The Higgs Boson particle accelerator is like a giant pinball machine which we hope and pray doesn't register 'Tilt' and suck us all into a game ending black hole. Why have creative writers ceded this fertile imagination to the scientists? I'd be on to my Trade Union about demarcation disputes, if we writers weren't so isolated in our artistic pursuits as to utilise Collective Action (honourable exceptions such as Year Zero Writers). Writing is institutionally a collaborative process, with editors, publishers, cover artists and the like. But there ought to be a collaboration with the reader who admits us into their private reading space in the first place. And to do that, it might be nice if we could give them something fresh to chew on. The novel is a 200 year old art form, which had some modernist makeover treatments last century, but still remains basically the same as it ever was. Where are the 21st century novels to take it, the readers and the writers themselves forward into a more relevant, updated medium of communication?

So, I want to interrogate language and prevent it slipping out of my grasp through its supple elasticity.
I want to deconstruct alphabets and typography and see what fun one can have with the look of text on a page.
I want to help usher in a whole new gamut of metaphors, one that delight in distorting scale from not just the human, but plunging into the quantum and rapidly Dopplering into the cosmological, maybe within the same sentence.
I like words that have more than one meaning, or at least different shades of meaning. And I like to suggest both meanings within the same usage, even if they work against one another. 'Fast', and 'cleave' are delightful words that have diametrically opposed meanings within themselves; you can cleave things together or apart. Something can be stuck fast as much as moving at a rapid speed. Words change their meanings with usage and time. The original root of a word may mean something very different from what the word has now mutated into.

This is the slippage in words that trips us up in everyday conversations and social situations. Writers need to interrogate words more
defintively in order to nail down meaning. And we can only do that by entreating with the language in the first place. The modernist experiments of Joyce, Faulkner et al, may have liberated the sentence from conveying one single meaning, but they could have gone back to a primordial source, that of the word itself and freed its
hidebound links with nominalism; how is a flatpack Ikea table the same as one in a mortuary where the weighing scales sit, or someone in
a BDSM relationship who is bent over for the Dominant to place their feet on, or an upturned ammunition box - each offer the function of a table top surface, but all have very different power relations inbuilt into them. Words are not neutral, they derive from the need to express the relationship of things to each other so we can organise the world
around us into workable arrangements. Time to start unpicking these givens and that includes the words they are couched in.

I used to write stage plays. Lots of dialogue. Other than the authenticity of a character's 'voice', their idiom and means of self-expression, I wasn't terribly interested in dialogue. I was more taken up with the sculpting of physical space through the movement and shape of the performers' bodies. Through the prosaic circumstance of becoming a parent and not being able to hang around theatre bars anymore, I turned my hand to prose writing. I looked for the equivalent of this sculpting of the spaces in between. I came up with the whole language thing as my point of entry. Ironically, now I return to 'voice'. It's through authenticity of voice (if I've done my job properly) that character bleeds through. My characters are rarely described physically. Their names are often not their true ones. They serve for the guides to conduct the reader into the worlds they don't so much populate as define. Define through their voice. They spin their tales inside the reader's imagination, but unrooted in a preset material reality, so that the reader can also duet and spin the character in a pirouette to their desire as well. Reading is a shared relationship within the intimate environs of the reader's mind. What Proust called "that fruitful miracle of a communication in the midst of solitude" (quoted by Maryanne Wolf in her book "Proust And The Squid" about the processes involved in acquiring reading skills. The writer's voice has to seduce it's way inside. I would prefer to do it, not as the literary equivalent of a doorstop salesman, wedging my foot across your lintel, but as a masseur, a suitor wooing you through words. An inamorata louchely leaning against the foramens of your cranium, whispering sweet everythings into your ear with my tales.